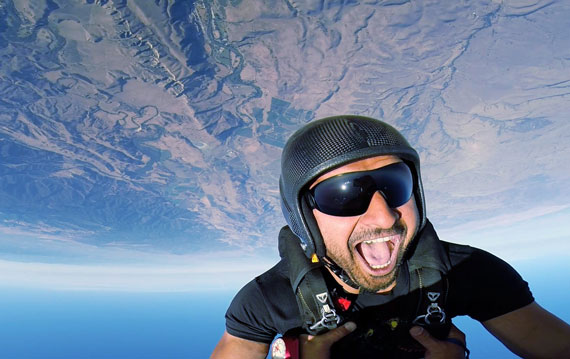 When he’s not skydiving, Sujan Patel is writing 4 to 6 high quality blog posts for Forbes, Inc., and The Wall Street Journal about content strategy.

During his re\VISION New York talk, Sujan shared some strategies that brought him to where he is now. While the overall goal is to get involved in the community you want supporting you, Sujan broke that general ambition down to seven actionable tips that over time will increase your ROI.

Instead of seeing your blog as a message in a bottle you cast into the ocean never to see again, acknowledge that each post has the potential to be continually reworked. These tinkerings with a post after the fact is called post enrichment, and the overall process allows you to increase traffic and refine your image.

“If you’re getting a lot of reshares on your old posts, or content that is continually getting traffic, it’s great to just continue to update that content. It’s like you’re presenting yourself in the best form. It’s super important to do that.”

Tools like SEMrush, WordStream.com, and KeywordTool.io should be bookmarked.

“I can tell you from dealing with dozen of clients, this is probably the one most overlooked….Do your keyword research. And not necessarily to sprinkle those keywords around the post, but to make sure it’s relevant. Do people actually want to hear about content marketing or do they want to hear about content promotion? That might be the same to you but may be different for the audience. So write about what people are searching for.”

“What I mean by promotion is literally after you write your blog post or after you publish, I think that’s when you’re 45 percent done with content marketing. Most of your job has just started at that point.”

More often than not, Sujan will have a promotional plan set before he even writes the material: “I write the emails, I write the tweets before it gets published.” While it’s a fairly big mental-shift to focus on promotion as much as writing, it pays off big time when done properly

The promotional plan can include emailing people who may be interested in the article, as well as those whose quotes appear in it. BuzzSumo is an invaluable tool. It helps you find the keywords that have been coming to mind with your audience, among other things. Answering a couple questions a day on Quora can also generate a ton of buzz around your work.

To Sujan, marketing is all about building relationships. He connects with content curators and offers to help them, often with a guest post. The curation step also includes reaching out to bloggers whose site he admires. Referencing a recent post that struck a chord and welcoming feedback on his own work is a solid way to build trust.

“Give me your feedback. If you like it, share it. But feedback is really the code word for sharing.”

If you want to streamline this process, check out content marketer, a tool set to launch July 15 that Sujan developed.

Sujan’s path from smaller sites to national ones was a long, strategic process. He started pitching posts to smaller sites, especially ones where his friends were digital marketers. Once he could prove that that post was successfully, he went on to pitch it to a larger website. If needed, he bought traffic to ensure that the initial blog was a success.

With enough success at more targeted sites, when he approached Forbes and Inc., he could say that most of his posts get 20K plus shares. Naturally, this number excited publishers. The figure was so impressive that he didn’t even have to mention the story idea.

The key to social media is to be really involved — really as in frequency and really as in authenticity. Sujan joined 12 Slack groups around marketing, startups, and business.

“Don’t be self-promotional…get involved, talk to the community.”

The benefits of community engagement on ROI will show themselves in time. A third of the traffic on Sujan’s blog comes from Slack and Linkedin communities. While this is a benefit that needs no explanation, it’s not only about the traffic: “Traffic is great for us, but now we have a voice in the small business community, that’s even more impactful than just the traffic.”

“Go back and see which (articles) have the most traffic or which ones are most related to your audience, and then retarget them to specific ads.”

Knowing which posts a prospective consumer shares would hint to you what kind of ads would speak to him or her. These ads don’t even have to be about selling, but referring to other posts that they might enjoy. Now that you have a greater understanding of what topics interest them, your chance of sending them the right ad drastically improves.