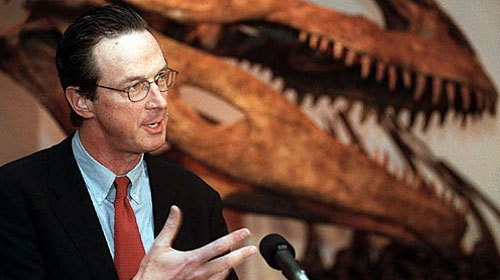 His novels include mini-lectures about the pathology of deadly viruses (”The Andromeda Strain”); Bernoulli’s principle and its role in aerodynamics (”Airframe”); black holes and submarine technology (”Sphere”); higher primate evolution and the intricacies of voice recognition software (”Congo”); chaos theory and DNA replication (”Jurassic Park”); the list goes on. (Even in ”The Great Train Robbery,” what clearly caught the author’s imagination was the intricate clockwork of a well-planned crime; in ”Disclosure,” it wasn’t the murky human stuff — desire, power, sex — but the corporate mazes through which his characters, like laboratory rats, were forced to run. It’s the geeky stuff, in fact, that makes Crichton’s books so hugely entertaining, lending thrilling documentary realness to the proceedings. And he makes the factoids seem — well, fun. Like the high school teacher we always dreamed of, he moons over double helixes or particle theory in a gee-whiz manner guaranteed not to terrify those of us who got 54’s on the chem midterm.